The vapour space of two 100-m³ heavy fuel oil tanks, both built with stationary and nonflexible roofs, exploded inside a barrack. Welds on the shell/bottom junction were torn apart. The first tank, containing 7 m³ of hydrocarbon, loosened and fell[...]
Read more 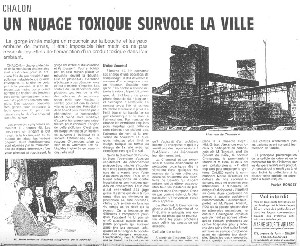 At 7.10 am, 300 kg of phosphorus trichloride (PCl3) spilled over from a measuring tank during a loading operation and hydrolysed in the sewers of a chemical plant. The day before, 1,320 kg of 2-ethyl-hexanoic acid was introduced into a[...]
Read more
A leak occurred at the level of a fitting on a 12" racking pipe located downstream of the foot valve on a 4,525 m³ tank containing unleaded gasoline with a 98 octane rating (SP98). The retention basin of this tank[...]
Read more

At a hydrocarbon depot located in an urbanized zone, welding work was underway on the "emergency access track". At 11:15 am, a leak of premium-grade gasoline occurred, succeeded by a sudden flash. Site technicians attempted to extinguish the ensuing pool[...]
Read more 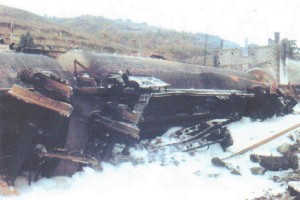 A 22-railcar convoy derailed at 11:50 pm in a small town of 2,000 residents; 9 tanks carrying 80 m³ of unleaded fuel spilled, ignited and exploded. This burning gasoline consumed dwellings and reached the sewer system. Electricity had to be[...]
Read more 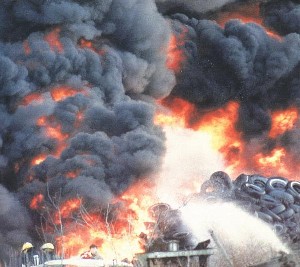 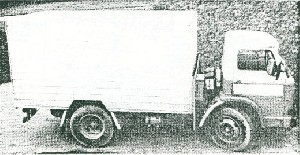 At 9:45 am, a vehicle transporting nearly 800 kg of explosives exploded while making a U-turn on a company's premises within an industrial park where it had taken a wrong turn. The lorry, specially equipped to transport up to 5[...]
Read more