In a pharmaceutical plant, during an operation intended to remove dimethylsulfide (an odoriferous compound), a violent explosion audible for several kilometres fractured equipment (rupture disc, manifolds...) on a tank containing a cyclohexane-rich flammable distillate, and blew windows out of a[...]
Read more 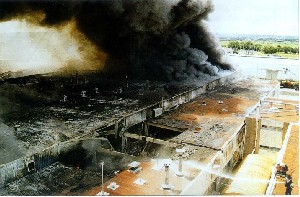 A catering facility (handling 35 tonnes/day), in the process of obtaining administrative authorisations, ignited (due to flames or a short circuit?) around 1:10 pm at the periphery of an industrial zone. 4,000 m² were destroyed within 17 min, followed by[...]
Read more

Inside a motor factory the day after a pressure test was conducted on a double-shell tank containing hydrocarbons, pollutants spilled into the ENNS River; local fishermen made the discovery. This pollution outbreak affected 35 km of river length and 3[...]
Read more

On a tubular exchanger, a disc broke over ¼ of its cross-section at 4:50 am during a pressure surge in the liquid ammonia (NH3) circuit connecting medium-pressure NH3 storage cells to a urea workshop operating under stable conditions. A valve[...]
Read more

Fire broke out in a low-pressure hydrogenation unit at a chemical plant. The unit's fire detectors sounded the alarm while the 1st process phase (hydrogenation of phenylacetylcarbinol with benzylamine in an isopropyl alcohol solution using a catalyst) was ongoing. An[...]
Read more 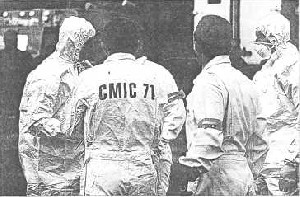 In the attic of a slaughterhouse, 2.2 tonnes of ammonia (NH3) intended for recycling back to the unit leaked onto a solenoid valve on the low-pressure return circuit of a ground beef freezer. Employees were evacuated for 24 hrs, 40[...]
Read more 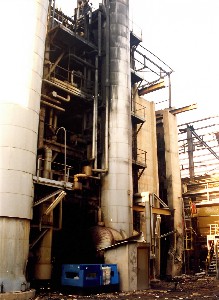 An explosion and fire occurred at night inside a workshop dedicated to toluene di-amine (TDA) synthesis by means of hydrogenating dinitrotoluene (DNT) in the presence of Raney nickel; the workshop had been taken offline for scheduled maintenance. Internal fire-fighters had[...]
Read more

In a fertilizer production plant, an ammonia leak injured 3 workers, one of whom died. On December 1st, 1994, the weekly cleaning of the dryer was scheduled. The tubular reactor of this dryer was shut off at 6:25 am then[...]
Read more

The summary of this accident has not yet been translated. In the meantime, please refer to the French summary : Sur un site chimique en milieu urbain, un disque de sécurité éclate et une soupape s'ouvre à 21h31 et durant[...]
Read more
An explosion occurred at 1:30 am inside an urban heating plant (500 MW, 6,000 m² floor area), with the energy dissipated into the ground estimated at the equivalent of a 50 kg charge of TNT. Operational since 1987, this heating[...]
Read more