A storm surge coinciding with high tides flooded the salt caverns used to store hydrocarbons at a petrochemical site. The alert was given at around 11:00 p.m. by a technician who was conducting a patrol. The remote-controlled shut-off valves were closed[...]
Read more

What happens when the world’s third-largest economy is simultaneously hit by a once-in-a-century earthquake and once-in-a-millennium tsunami ? Two years after the media coverage of the Fukushima Daiichi nuclear power plant accident, this overview provides insight into the primary accidents[...]
Read more 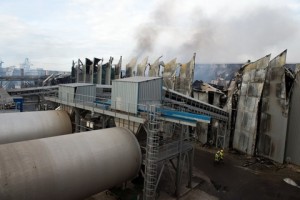 A fire broke out at around 2:30○a.m. in a 2000○m² sorting building at a waste processing facility. The facility, which was commissioned in 2010, sits on an isolated 18○hectare plot in an industrial port area. Driven by the wind, the[...]
Read more

The flooding, caused by a more or less rapid water level increase, either total or partial on site, has various origins: intense and prolonged rainfall, flooding of watercourses, clogging of the sewerage network, dam or dike rupture, rising of groundwater...[...]
Read more

A natural hazard (flood, earthquake, forest fire, storm, ground motion, avalanche, cyclone, extreme cold, heat wave ...) can have an impact on an industrial installation and thus be the source of one or series of accidents with major effects outside[...]
Read more 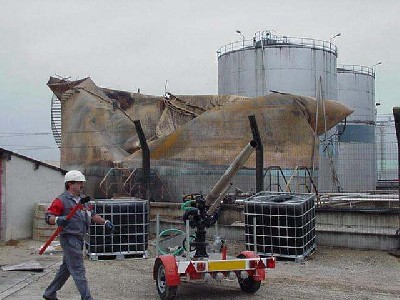 Lightning, often associated with the powers of gods in mythology, can have serious impacts on industrial facilities and entail human, social, environmental and economic consequences. The ARIA database records about 100 lightning accidents that took place in France between October[...]
Read more 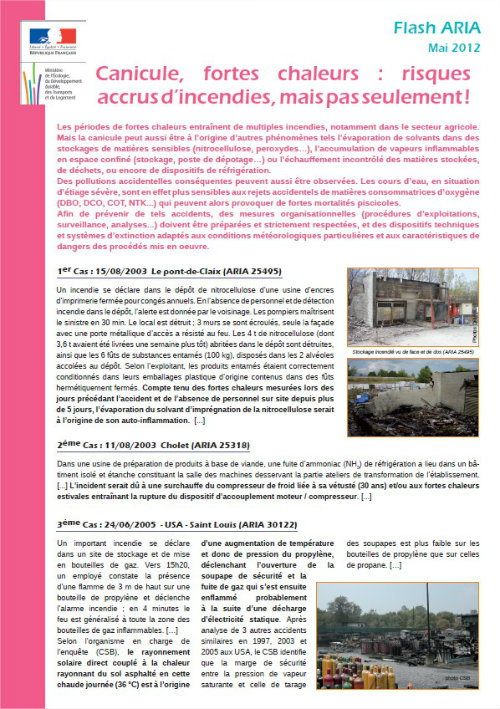 Periods of intense heat cause many fires, especially within the agricultural sector. But a heat wave can also give rise to other phenomena like: solvent evaporation within warehouses containing sensitive substances (nitrocellulose, peroxides, etc.), the accumulation of inflammable vapours in[...]
Read more 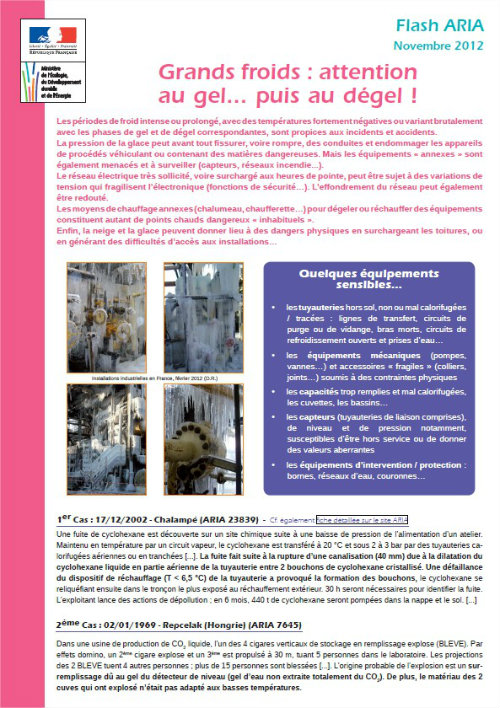 Periods of intense or extended cold weather, accompanied by temperatures well below 0°C or varying abruptly with corresponding freezing and thawing phases, are prone to incidents and accidents.
Read more 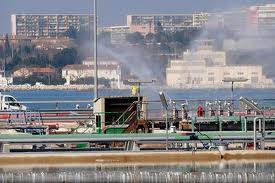 Connecting an oil terminal to a chemical plant 1.5 km away, a heat-insulated pipeline pressurised at 300 mm was perforated following a period of intense cold weather; 4 m³ of benzene had solidified upon shrinking below 5°C. By 2:50 pm,[...]
Read more